Random Encounters At The Opera

The stalls are the flat bit at the front of the auditorium, next to the stage. The gods are the highest balconies, way up the back. The boxes are along the walls on either side and are private. In terms of price and prestige it goes boxes-stalls-gods. If the PCs are poor as shit they might get seats in the gods, if they're well-to-do adventurers it's the stalls and if they're extremely rich or a local dignitary has invited them the lucky bastards will get to sit in a box.

If you're going to use these on some kind of carousing table - and you should - you should probably also include some kind of positive effect, I guess. Like going to the opera gives you more spell slots or something to talk about w/ the King? I don't know, I am only good at inventing horrible things

Also if any of these don't wind up w/ you exploring some sort of incredible labyrinthine backstage catacomb opera dungeon w/ masked figures fluttering about the catwalks and soul-eating piano organs carved from human bone and terrible cold lakes below the city where a legion of faceless men teach a vast blind pale squid to play a cello the size of a horse then what are you even. What are you doing. You fool. You madman. 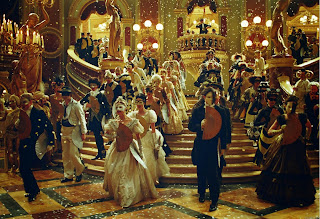