The Unfortunate Occurrence at Thumbroke Manor

I have decided I want to run Gothic horror games using Into the Odd. I think that's a good and normal thing to do.

So here's a game we did several days ago. I ran it and Nico was the only player. It took maybe an hour to write and a bunch more hours to play, which is a good return on investment, especially if any of you guys use it also. I'm good at being characters though so that means I don't need a lot more to a run a game than a couple of strong personalities in a tense relationship. Your skills may lie in other areas! See how it goes.

Read more »
Posted by Dunkey Halton at 02:08 No comments:

The Town That Were Pubs

Sailors talk about it in hushed tones.

The food is very good. Most pubs have a speciality or two. There is a great deal of rivalry between denizens of neighbouring pubs.

The bar staff all seem like normal people, but you have never heard of anyone you know being hired as one. The don't answer inconvenient questions about how it all works, but they're not dicks about it.

You meet all sorts of interesting people in the Town That Were Pubs. Viking chieftains, Tang Dynasty poets, Nantucket whalers and labourers fresh from cutting stone for the Pyramids. Also wizards and elves and bug-eyed guys from Tatooine cantinas. The Town That Were Pubs respects no boundaries of time and space. 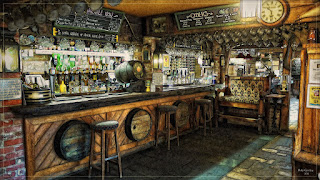 Email ThisBlogThis!Share to TwitterShare to FacebookShare to Pinterest
Labels: Pubs

These are names. Names for pubs. There's no special trick or anything.
Roll once on each of the tables below*, stick your results together. Or click the pretty pictures!

*We got too excited about names, so you're going to have to do 1d6*1d20 to get results

Read more »
Posted by Dunkey Halton at 20:50 No comments: