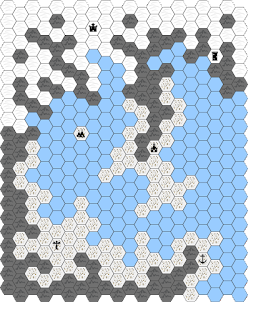 This is a map of Hyperborea. Or at least the part of it I'm putting in my book.

The anchor in the lower right is KINGSMOUTH. I wrote about this before as Kesselhaven but I'm going to change the name and some of the details. This is the Yellow City of the setting - the hub that adventures will tend to begin from. It's part Jacobean London and part Melville's Nantucket.

Kingsmouth is a whaling city, lit and kept warm by gutters full of flaming oil that run from stone hilltop towers into the harbour. It is ruled by King Jasper Stuart, who lives in fear of dissident Levellers that want to behead him and distribute his oil-wealth among the people. He is served by an order of secret police called the Illuminators, who harvest oil from the nornhvalur, the witch-whale, every winter solstice and burn it in lanterns whose light exposes people's secret desires. They're based out of a huge lighthouse carved from a single gigantic tusk.

Everyone in Kingsmouth is born female, becomes a boy after their first voyage on a whale-ship and becomes a man after seven full years served at sea. Gender roles are enforced. The slums are run by criminal wivegangs, made up of sailors' wives and widows. Bear-baiting, plays and public executions are all popular entertainments. The theatre companies are censored by the King and always trying to flout the law. Minor criminals are sent to a prison hulk called the Adventure. Major ones are maimed, boiled alive in oil or staked outside naked to freeze to death.

In the book all this stuff will be written up in table format so you can generate a pub or a play or a creative mode of execution or w/e. I want it to design it so you can pull out individual tables and use them in other contexts. 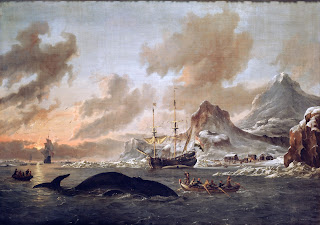 The church in the centre right of the map is TOLERANCE. It's a settlement of Levellers, gloomy black-clad puritans who hold all property in common and have declared joy illegal. They have no ruler. The ruler they don't have is Praise-Poverty Vandersmeer, a charismatic Cromwellian preacher who believes the reign of man is at an end and the Hierarchs (standard elder gods) will soon arise from their slumber in Hyperborea's frozen heart to inaugurate an eternal winter across every possible reality. Still working on these guys.

In the upper right is GLASSHEIM, the obsidian tower of the sorcerer Roald Amundsen. It's built in the path of a glacier, fixed to the bedrock, and the glacier breaks around it like a river flowing around a bridge pylon. Amundsen is not technically a lich. He has learnt how to enter a meditative state of living death, lowering his calorie intake to the point where it's negligible and training his body to survive on less than a single breath a day. He intends to live forever, to conquer entropy itself, and is already planning to make himself king of the beyond-the-zero negaverse that he anticipates will follow the heat death of the cosmos. The airship Italia is tethered to the top of the tower. He is using it as a base to communicate with the spirits who live in the aurora, which he believes are outside of Time. He has several children with a princess of Zulshiban and has a pact with that subterranean nation. 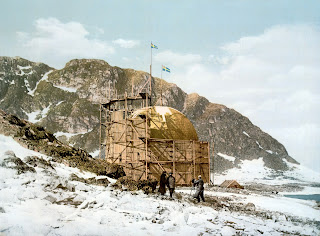 The totem in the lower left is the THING ROCK, a lone monolith in the tundra that plays home to the skraeling parliament.

All animals are just humans wearing masks. A long time ago the first human, Peacemaker, went around wooing the most beautiful maiden among each kind of animal, getting her pregnant and convincing her to take her mask off. Thus the hundred skraeling clans were born. Each clan owns a longhouse where the clan Grandmother lives. She runs the clan and keeps safe her ancestor's mask, which allows any clan woman who wears it to take the shape of their totem animal. Children are of their mother's clan, and marrying inside the clan is incest.

Each clan gets to send a representative to the parliament, the All Thing, where the peace of the skraeling Confederacy is maintained. They are constantly at each other's throats over petty bullshit. They throw huge potlatches, competing to see who can sacrifice the most food, masks, metal, mammoths, dogs, caribou and slaves. They play a brutally violent ballgame, like lacrosse or hurling, with a leather ball and whalebone paddles. Masks are titles, deeds to hunting grounds, markers of membership in secret societies and ownership of particular songs. They're often used as currency.

Shamans are outside the clan system and act as impartial judges, a bit like the Supreme Court if part of their job was to enforce the boundary between life and death. Everything is alive and has a soul. When you die you go up into the aurora or down into the darkness under the sea. Or you can lease your soul to a shaman and become their ghost-slave for a while. Sky Elves are the ghosts of children who never grew up. They want friends but don't understand ethics, and will kidnap you away to starve in sky palaces or play ball-games with your head. Rock Elves are wizened old people who hid under the earth until their soul withered away from lack of light. They are sad and frightened and will live forever. Renegade shamans are loathed and feared, like cops gone bad. The child of two shamans is always a monster.

The tents in the centre left are on BEAR ISLAND. The Bear People were exiled from the Confederacy centuries ago for the crime of cannibalism. They still insist that cannibalism is a perfectly reasonable survival strategy in a resource-poor environment like Hyperborea. They've cut a deal for Zulshiban to use their island as a staging-ground for slave-raids. Their beaches are strewn with scavengers and bones. 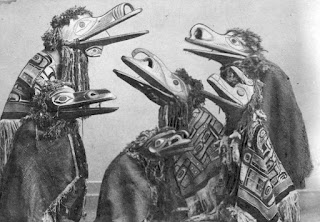 The palace in the upper left is ZULSHIBAN. The bay ends in a cliff of ice, floating in the water, a hundred metres high with ninety percent of its mass below the surface. Tunnels called the Maws have been bored into the ice, wide enough for five ships - usually Zulshibani triremes rowed by crews of slaves - to travel abreast. They lead to the Hungry Ocean, a secret sea that runs through the caves beneath the Hyperborean icecap. Caisson locks allow ships to pass while preventing its blood-red waters from draining away into the waters of the surface. The Hungry Ocean is inhabited by a prehistoric civilisation of sapient bacteria and produces heat when fresh blood is fed to it, particularly the blood of intelligent creatures. The city of Zulshiban sits on its shore, surrounded by tropical jungle, in a huge warm humid cavern below a roof of dripping blue ice. Every year they have less slaves to feed it. Every year it gives less heat, their farms fail, their armies falter and their culture becomes weaker.

The bacteria colonise living hosts to interact with the wider world. A colonised creature is called a ghoul. Each is a nation in its own right and its actions are as cryptic and erratic as those of nations. The will of animal ghouls is swiftly overwhelmed. Human ghouls generally achieve a kind of eccentric symbiosis with the kingdoms rooted in their flesh, and often get psychic powers or some other kind of mutation-table effect. The current Empress of Zulshiban was anointed with sacred oils and bathed in the lake as a newborn. She is one thousand years old, inhuman and almost unkillable, to the chagrin of her daughters.

The fighting pits of Zulshiban are famous. Janissary slave-soldiers fight dinosaurs and degenerate pale crab-things from far below the earth, knowing the loser will be fed to the Ocean. Exotic spices are grown in the jungle, vampire orchids are raised and carnivorous worms spin silk. The aristocrats of the city indulge in every type of luxury, seeming not to care that each bite of peach or puff of black opium brings their society closer to the end. 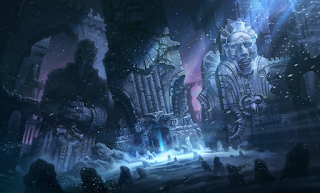 Beyond the southern edge of the map is probably Hyperaustralis, Mount Penglai, the pleasure palace of Xu Fu and some kind of Sino-Mongolian steppe. I already have enough to work with, though.
Posted by Dunkey Halton at 21:24 3 comments:

Castles of the Marcher Lords

Scrap had a thread about neglected literary traditions. It led to me writing a generator for the titles of pamphlets that you might see on the street in seventeenth-century England. HERE IT IS. 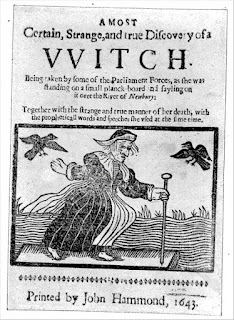