Posted by Dunkey Halton at 07:06 No comments: 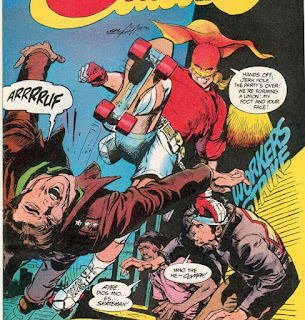 Additional bonus superteam: OCTOPUS SQUAD. Eight people, each of whom has one of the powers of the octopus. In emergencies they all hold hands to fuse like Captain Planet into a giant octopus. Inspired by Finding Dory.
Posted by Dunkey Halton at 04:26 1 comment:

Dandelion men have slender flexible stalklike bodies and a variety of limb configurations, most of them within one standard deviation of human. When they're young their heads are yellow rosettes. As they grow older their florets shrivel and are replaced with bristly white seeds.

Younger dandelion men are fearless bravados who leap from adventure to adventure, never tiring as long as they have a supply of water and sunshine. They sing ballads, fight duels, woo beautiful ladies and lords. (Of other races: dandelion men are genderless and reproduce asexually. It doesn't make sense that they would pursue romance, but it doesn't make sense that they would willingly seek out danger, either.). Older dandelion men are grizzled, cautious, regretful and wise. They write epic poetry, command armies and settle down in polygamous friend-marriages with small groups of other dandelion men. They dwell either in the dandelion city of Taraxacum, which has very crooked streets, very high walls and windsocks everywhere, or in foreign dandelion ghettos that reproduce this architecture in miniature. They're a bit like medieval Jews, holding down "clever" jobs like lending money or advising the king but generally distrusted and always on the look-out for the next pogrom. The wildness of the younger dandelion men can hurt them here, like if one seduces the wrong prince or whatever, but it can also make them more relatable.

The green stalkflesh of dandelion men is bitter but healthful, and can be used to make a delicious and medicinal liqueur. Dandelion men are also knows as blowballs, clocks, lion's teeth, milkwitches, cankerworts, priestcrowns and puffballs, some of which are derogatory and some of which they have ironically reclaimed.

When all of a dandelion man's bristly white seeds are blown away, it will die. Only a small percentage of the seeds will take root somewhere that a young dandelion man can grow. Whether or not it's moral to uproot a young dandelion man should you find it sprouting in your garden, still in the pre-sentient, attached-to-the-earth stage, is a hotly debated moral question, but most people will just do it anyway. If you are nice to a dandelion man while it grows, watering it and protecting it from bugs, it will be your friend when it begins to bloom. They take about a year to go from being planted to full intellectual maturity. They live about ten years, on average.


Here is where the rules for playing as a dandelion man should go but I can't be bothered to figure it out. Strong wind removes your seeds, keep track of how many you have, get some kind of dex and int bonus to compensate. They make good rogues and warlords if anyone is still doing warlords. I can't really see them using that much magic, definitely not fire magic, but I can imagine there might be such a thing as a dandelion man's curse.