Okay I just had this dream last night. It is for Mothership probably though I've never played or read it.

The TETRAD is a prison ship, or was. A thin torus spinning to produce uncomfortably heavy gravity. You probably docked because of the distress call, but maybe you just saw the scorch marks and missing section and thought 'huh'.

Doors open to reveal a bomb the size of a golfcart. Oh it is a golfcart! Covered in accelerant with a scrawled note: 'lol u idiots - pay fealty to Lupin and maybe you can leave' 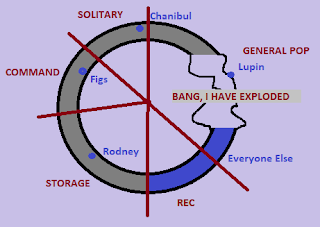 In a minute Victor 'Figs' Fontanelli jumps on the intercom, announces that he's 'the warden round here'. He's doing some kind of cowboy/Zsasz routine. Sounds like he's having fun. There're panels by most doors you can use to talk back, and he's keen to talk. He'll explain what he knows, that something went wrong and the prisoners got loose. He's holed up in Command, the last person there alive. He's got guard droids blockading the door between Storage and Rec, where the surviving convicts are holed up. He apologises, Lupin is 'no longer with us', and Figs doesn't know how to disarm the bomb. He's been taking advice from Chanibul Vector, a cannibal savant locked up in Solitary, who might know how to help.

STORAGE
If you stick around and search thoroughly, you might find Rodney Peck, holed up in a shipping container with two thousand cans of seaweed and five other guards, four dead and one comatose. Rodney's mind is pretty much gone. He has no idea whether he's been eating dried food or his friends. He can help clarify that Figs is 'one of the crazies, worse than them in Gen Pop'. He has a vague understanding that the explosion was some kind of insurance scam gone wrong, and can maybe answer questions about guard droids or bulkheads or whatever else. If you spend long enough dicking around, or start Rodney screaming again, a scout team from gen pop will find you.

REC
It's mildly tense, but democratic and well organised. There're two inmates more in charge than the others. Shadrock Clemens is short, nosy and intense. Locked up for anarchist agitating and industrial espionage. Hates making decisions, though actually very good at it. Bolo Startrek dealt drugs and killed people in a different life. Reformed for the last three decades, locked up for the last two. Bolo will probably never recover from the anger and pain of imprisonment, but channels that energy into community organisation and support.

For those inmates who weren't killed in the explosion, life has considerably improved. They can sleep where, and with who, they want, have free access through the rec rooms and what's left of Gen Pop. Despite the rations they've self-imposed (with a 2/3rds majority vote) everyone has more food than they've had in years. They practise restorative justice for the few incidents that arise. Their simple rules, rarely broken: let everyone be heard, respect people's boundaries, follow consensus, don't lock any doors.

They get to storage through the air ducts, avoiding Figs' blockade, foraging for dried goods every few days. They try to not be spotted, so as to not upset Figs' paranoia. A minority would like to overthrow their assumed warden, but most don't really care. Sneaking past the droids is pretty fun, and they're not going to gain much by taking over more spartan steel corridors.

COMMAND
The bulkhead between here and Storage is actually secure, no air ducts and cheap hollow walls, and Figs will ask you to leave your weapons in the bin provided. The first few rooms are plant equipment: water cycling, O2 and power. Next are barracks and droid storage, maintenance shop, the control room, sickbay, then the bulkhead to Solitary. Figs is holed up in the control room. He's dragged in a dozen mattresses, replaced the security feeds with porn and cartoons, spray painted a little colour into the place and even found a potted fern somewhere. He doesn't seem put off by the smell of the old warden, gutted and nailed to a wall. Figs is very accomodating, smiling and eyeing you off like a tiger. He always has a couple of knives on him, and two taser-armed droids he's named Benny and Penny. He wants to kill you, obviously, but only A) if you lower your guard, turn your back, or otherwise show your trust, or B) if he thinks you're gay.

SOLITARY
Figs will insist on showing you the way to Chanibul Vector. The other cells you pass have had the air vented, most contain a mummy in a white jumpsuit. Vector's has the lock welded shut and a droid on watch, though the man is calm, composed, his superiority lacking the desperation of Figs'. He insists on pleasantries and introductions, a little background insight into his new 'guests'. Before answering any questions he demands payment from Figs. Suggests one of you go help Figs carry back a treat. Once Figs is gone he is direct.

The ship was sabotaged by the old warden, though not very effectively. The O2 lines didn't combust properly and only a quarter of the ship blew up. Lupin, in solitary for repeated escape attempts, busted loose and freed Figs to help subdue the guards. With the droids distracted fighting fires and riots in Gen Pop, Figs killed the head officers and commandeered the command deck. Lupin hacked into the droid controls, turned them on the leftover guards, and in about four hours the ship was theirs. It took only a couple days for Figs to decide Lupin had got 'too queer'. He threw him out an airlock, and only now realises he's stuck here. He can't update the droids' orders, doesn't know how to disable the bomb blocking the only dock, and is terrified the other prisoners are going to bust in to command and 'take turns on him'.

Chanibul would like to be free, but for that will need the door unwelded and the guard droid disabled. He suggests a coup. Lupin's body is still tangled in the wreckage just outside, and his notepad has the passwords and filepaths needed to reconfigure the droids. Figs, who will be back any moment with a plate of fried human, is readily distracted. Apologies if he's already killed anyone you sent with him. Once you have disabled his droids and taken him down, come bust old Chanibal out and he will take care of that nasty bomb for you. (The bomb is a convincing fake, which will become obvious when Chanibal steals your ship and flies off cackling) 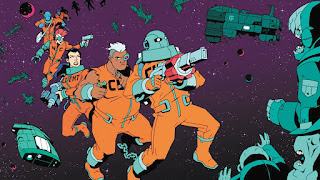 A Taxonomy of Elves

Kindly recall that elves are magical phenomena that do not exist in material reality. Though physical means of treatment are absolutely necessary, they cure only symptoms, not the disease. Killing them does little but keep the abductions down.

Viral elves are called fae, faerie, folk. They are the least concerned with human life, though as dependant on it as the rest. They are the most uniquely aware of their unreality, that they are momentary projections of a subtler force, mere ghosts of metaphor.

Fae are a parodic reflection of man's relation to nature, a psychic hijack of a corrupted means of production. They embody not wrath but scorn and derision, most often scolding and punishing. Tangled are their judgements, buried under irony and snared on subconscious guilts. Outbreaks occur most commonly as morality shifts, when old taboos are broken or new ones formed.

They appear most commonly in carousing bands, near-identical but reaffirming themselves with titles and caricatured relations. They pantomime society's most powerful figures to find better purchase in its psychome (their host), bitterly counterfeiting an individuality they can never possess. Identity is often erased by their judgements, sad princes turned into ponds or flayed poachers stuffed in goat skins.

The classic witch's cure is a simple memetic immunisation (leaving out perhaps a saucer of milk, or never breaking twigs on the solstice) and of course reconciling a culture with the natural world is an instant fix. 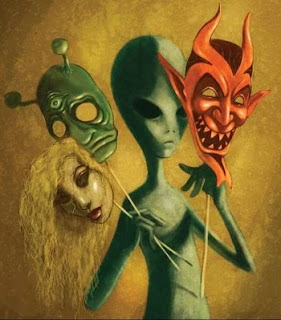 Bacterial elves are called borrowers, brownies. They exist in the essence of man's slow succumbing to nature: where homes crumble, bridges rot and fall, a carriage molders in the wood and a low cairn grows over with moss.

Feeding off this decay, borrowers must necessarily nurture it, protecting it from other agents of decomposition. They are martial, though more concerned with ceremony, ritual, keeping house.

Their population kicks and spurts; only after a decade do they move in, then five or six, a family. Each decade brings a dozen more, each century or so another clade, an institution enshrining their traditions against the ending of the slow collapse they ride. Castes of candledousers, damcoddlers, snailslayers and lichenmonks war against entropy.

White-haired sages sing their legends to starry-eyed squires (each turning of a season is 400 of their years, a lifetime) and pass the sacred knowledge of their home. Every detail is recorded in verse, woven into tapestry, tattooed, mosaiced, tallied and stored that it might be preserved for only a year more.

A flip book the size of your thumb, four hundred perfect paintings of a bench rotting away in the woods; a loving, anguished study of a raindrop falling to dissolution in a puddle.

Insectile elves are called sylphs, sprites, satyrs. Thriving on the sheer bloody mass of humanity, their encouragement of human activity is direct, usually carnal. They crave places held to be sacred, private or simply sentimental.

They machinate behind shotgun weddings and runaway brides, keeping families large and power structures volatile. It is fresh blood they want, not stagnant inbreeding, in politics encouraging unlikely alliance, conquest and coups. Even they seem not to know their motivations, caught halfway between lust and love, upturning old order for a joyous germination.

Commonly likened to pubic lice, in purpose far closer to the humble bumblebee. Fairy godmothers are their ilk, though any stated preoccupation with destiny is a distraction from the base nature of their desires. They watch you when you fuck.

They can be differentiated from viral elves via vivisection. From the many-eyed drow to the furze-girdled satyr under a mantle of antler antenna, all are invertebrates.


Fungal elves are goblins, bugbears, redcaps and boogieboos. Their range of form and demesne are unparalleled, seemingly a species for every niche.

They may imitate other elves or other beasts entirely, stealing their wit from the foolish with tricks and pranks and gambling games. They are rambunctious and quick, most inclined to false friendship and eating children.

Of all elves the least anchored to this material plane, their form and fearsomeness may shift as a matter of perspective. Just so they are a stiltskinned wedge into our world, leveraging cracks and unbalances that other elves may colonise.

Loosest in form, they are the tightest mirror of man. Their characters are the nearest to human, with emotions in broadest range and schemes driving to most particular ends. Addicted to elvish irony, they hunt those whose true natures jar against their station in life and ruin them utterly.

Traditionally treated by throwing stones, numerous apocryphal tales suggest a stubborn infection can be cured by beating them at their own game. Such stories are gleefully disseminated by goblins.

Elvish animals is what people are.
Posted by Dunkey Halton at 21:16 No comments: