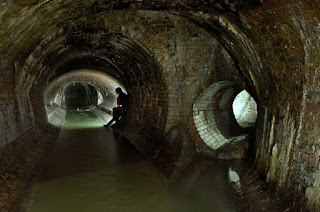 Just got back from Aotearoa! Nice place. Here are some of the fairies we met and some we didn't 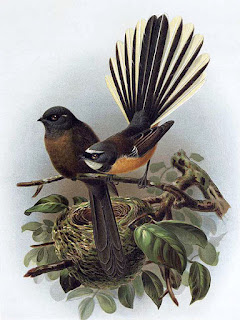 Tīwakawaka is very small, about the size of your thumb. Her mask is white and black and a blush of gold. Her arms are tiny, little sticks waving pinprick weapons. She shouts and dances and makes much fuss but loves to laugh as well. She will follow you far, bothering and distracting, hungry for interference but darting away from your attention

Kiwi is barely larger, as tall as your hand, or perhaps your father's long fingers. Her mask is white and she has no arms, just thick soft fur and clawed feet much stronger than you thought. She roams the forest tending quietly to streams and lichens, keeping a meticulous messy sort of order. She is curious, but cannot comprehend you. Watches you like a soap opera in another language, incomprehensible

Koukou is bigger, the size of a large dog or half a head shorter than you. Her mask is black, with limpid living eyes holding hard your gaze. She can open wide her eyes and swallow the light, torches and candles and stars and moon vanishing down to cold pinpricks in the centre of her pupil. Her arms are a writhing mass of short thick feathers, squirming over the ground hunting bugs, wafting past her mouth to deliver food. She does not want to eat you, unless you are truly weak and pitiful, but will leap on to you to pick lice from your hair and leeches from your skin

Kahu is as tall as a man or twice that. Her mask is golden, severe. She sways and hops in great bounds, razor talons stretching from long strong legs. She will eat carrion or live prey, it's all the same. To her you are already dead. Her arms are delicate feathers, coming out only to dance, a slow sombre falling, performed to and with her lover. If you are a truly gifted dancer you could pause her hunt, raise your arms and circle with her. Otherwise you should run, and hide, and pray 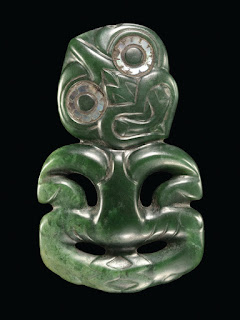 Horowhenua is out of breath. He stares up at the sky, his great grandfather, with a squinting, screwed-up frown that promises a tantrum. When rain torrents or snow falls in fat flakes he will kick his mighty grey legs, squirming about on his back, and cause all manner of avalanches and landslides. For now he sucks his thumb. He is sad and grumpy. He misses his father. He's hungry too. Give him food, or shelter, or a cloud to cuddle and he might offer reluctant aid. Best though to avoid him, and if you hear his rumbling cries, take cover!

Puia is sleeping. His cheeks flush with warm magma and his chest rises and falls peacefully. Even when not underground he clings tight to the earth, his great grandmother, tranquil when he can hear her breathe, feel her heartbeat, and share her dreams. The earth's dreams are too big for most people, who are trapped and swallowed in the darkest like the world is begun anew. Her grandchild's dreams are smaller. Games with his brothers, the dances of the birds, all the old stories of creation carved with a child's chisel. Poke your head in to his ear and you can watch and listen. Climb into his mouth and perhaps you could steal something, ancient dreamstuff or the more mundane fire from his heart. Do not wake him up.

Wairere laughs and giggles, in six or thirty-six piping voices. His little bodies gather at the top of the cliff and jump. Flipping, diving, bombing, splashing wet on the ground and rising, still laughing with glee, burst into mist by his game. He loves meeting new people, teasing and cajoling, and adores being asked questions, though he never agrees with himselves. Most of all he loves watching people realise things they should have known already, and also slapstick. If you're funny or intriguing enough he may even pause his game, the waterfall drying up while a gaggle of jiggly wet bodies stare enraptured and argue with themself. Many lost treasures are said to be hidden in waterfall cloaked caves. But don't let him catch you striking gold! He'll want a look too and you're sure to get soaked.

Pounamu is the youngest of his brothers, though of course he has been around the longest. His eyes bulge from his swollen head, his body a squatting foetus of more-than-human shape. When he moves his joints don't deign to flex, but instead the world bends around his mana. He is harder than any other stone, but light and clear, his green flecked with white and black, yellow and cream and sometimes red. He is a great lover of destiny, and if you see him he has likely bought a gift. Whatever it is; a tool, a weapon, an idol, a name, it has a story to unfurl fishhook-like into the world. It is likely to some day save your life, and just as likely to threaten it. 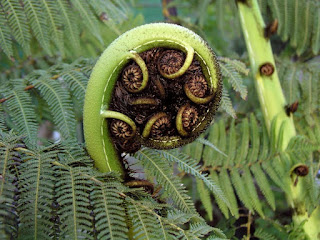 Tawhai stands tall, her back bent and shoulders slumped, head angled to gaze serene at the forest floor. Or perhaps she is lying down, eyes half closed and smile not quite fading, with a dozen daughters budding from her long body and reaching fingers to the sun. Around her bustle a swarm of retainers. Pudgy mushroom bodies bump busily into each other, delivering parcels and bundled messages to root and hollow throughout the forest. You will need to be accounted for as well, once they bump into you. A perfunctory meeting with Tawhai herself, then a small coterie of servitors, to follow you about and ensure you don't start trouble

Te Harore might escape your notice at first. Their tiny homes dot the sides of trees, vertical fields of green tended by wizened, lichen-haired farmers. Moss-draped warriors stand ready to be smooshed in defence of their homes. Elders dangle their feet from shelves of fungus and natter about the state of the world - the battles with birds and recalcitrant trees, the ongoing stalemate in the war between forests and ocean. Human problems aren't really their concern, being too fast and too big to get involved with, but human gossip they adore. Everyone who passes through the forest has been discussed, dissected and and dismissed, with great self-satisfaction. If you want to find out more about someone, you'll have to offer something new first, else it's back to the old wars, this year's harvest, and the size of cousin's sons (she must be so proud!)

Kūmara hides in the dirt, leaving only his long hair trailing along the ground. His body is portly and powerful, so it will take much tugging to yank him up. And when you do, how the wailing begins. He is a coward, and knows he is delicious, so will say and do most of anything to keep your belly full of anything but him. He knows where all the best shelter is, where to find the driest firewood, and the paths of all the nastier spirits, which he avoids at all costs. Never convinced that he's safe from your plate, he makes a most attentive valet; wining, dining and tucking you into a safe warm bed, and then off he runs. The next morning you're back to hunting for his long hair, tangled in the weeds

Patupaiarehe look almost like men. Taller, paler, with red hair and thin mocking voices. The fronds of their clothes, the wood of their homes, the barbs of their spears are all of the silver fern. During the night their skin catches the moon and it too turns silver. Never sure you've quite caught sight of them, you could follow their gleam safely to the edge of the forest. During the day they play flutes of human bone, haunting tunes that float on the edge of recognition, luring men to their death and children into the cookpots 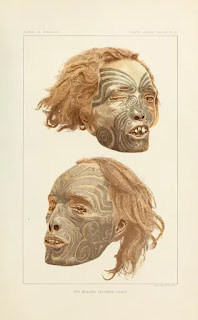