Tabbles are very important and also are sharks. Thanks for enjoy.


These all also work flawlessly for describing people, as well. Just roll on through the bits with fins.


This is a big fuck off tabble of normal stuffs that normal people could conceivably have on them and like fiddle with enough for it to be noticeable. You should kill those people and steal the the things and make them part of your schtick because character building.

Posted by Dunkey Halton at 22:50 No comments:

(font size is being fucky in this post. just ignore it I guess)

I have been thinking a lot recently about making a game where you play as colonists in 17th-18th century America, or a fantasy version thereof. This would somehow dovetail with the Comanche thing I wrote about here. Don't know how yet.

What I would ideally like to do is have a sort of dynamic hexcrawl system where the PCs move around the map founding new colonies, watching them grow organically, doing quests to help them along, defending them from the perils of the wilderness and the darkness of the human spirit. The flipside of this would be playing as the natives of the country, hereafter called "Indians", sabotaging the machinery of empire and trying to drive the invaders back into the sea. It would all be a bit like a tabletop version of Civ.

So here is a way of populating a colonial landscape with towns that develop a history over time, characters that interact with one another and a system of quests that naturally spawn and replenish themselves. The big thing it's missing is a way of handling Indians, who need to be exactly as developed in their characterization as the colonists. I'm still trying to figure out how to do that. There's more variety in social organization among the Indians than the colonists - the system below can handle Brazilians or French Canadians with roughly equal fidelity, but I don't have one that does both the Cree and the Maya.

(I'm calling them Indians because literally every source from the era calls them that, using Native Americans would detract way too much from the flavour of the period. What I liked about The Comanche Empire is that it treated Native Americans as basically the same as Europeans, organized differently and in possession of different skills but in many ways doing the same basic shit that Europeans did. I would like this game to capture some of that.)

Read more »
Posted by Dunkey Halton at 04:42 No comments:

Okay so I made this thing in SolidWorks. I'm calling it the Blood Pit, because I read a bunch of choose-your-own-adventure books lately and it ruined vastly improved my ability to name things.

The pit is broken into four wedges, which each contain a maze/gauntlet with the same layout. The wedges all funnel down to the centre of the pit, where they join up into a small gladiatorial arena. Looks like this:

The idea, from a metagame perspective, was to come up with a good way to do competitive rpgery. Start each player with a character or two in their own private wedge, then they have to fight through a micro-dungeon in order to get to the middle and kill each other. Obvious warning: this is not a good game type for the wrong kind of nerd. Friendships may should be broken.

The zones in these wedges are, in the order encountered, Ring, Riddle, Labyrinth and Trial. Each wedge has a theme, and each zone has a mechanically consistent but thematically different encounter. Every dead end is a Dead End. Save vs death, you rat.

Every round of combat, guess at a riddle and stumble through the labyrinth should be counted. Give it a wanky name like 'Heartbeats' or something if you're really desperate. Use these to keep track of where people are so that they enter the central ring at the right time.


For my mechanically consistent encounters, I have picked these things what are below:
Here are some example wedges:

The central arena can be anything you fucking want it to be
Just make it something that rewards people getting through the maze quicker!

And if you know anyone with a 3D printer then I can totally give you the file and you can go and print this thing and stick it in the middle of the table that's like half the whole point I mean c'mooon.

Barons of the Kingdom of Calvino 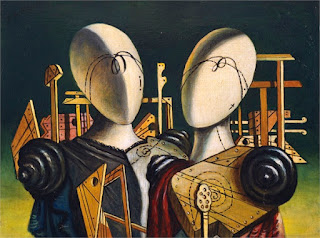 First three are from the endlessly gameable Italo Calvino, rest are more or less (in some cases less) my own invention. Use with bandit table to engage in maximum literature.
Posted by Dunkey Halton at 04:30 No comments:

Hydras: The "I can't keep doing this to myself" Edition

Swear to god y'all better let this die because we will keep making posts if you do and it will kill me and I will haunt the ever-loving shit out of you.

HYDRA OF THE LABOURS
Heads regrow in about a year, if the body isn't slain. Cutting off the first ten heads will cause the last two to sprout. Kill all the heads and you get to go hunt for the golden fleece, probably. Or maybe the hydra just has golden fleece.
PACK HYDRA
Stats as wolves. Roam around in packs of 1d6+1. When you cut the head off one, each other hydra gets another head. First one just dies though which is super sad </3

MEMETIC HYDRA
Is rumours about the pcs. Must kill with fire. Somehow.

TRICK HYDRA
Any damage not done in an effort to remove a head spawns a head with HD equal to the damage done. Cutting off heads does/does not produce more heads as normal, depending on how much you hate your players.


FUCK YOU HYDRA
When you cut off its head, you grow a hydra head. Your new head hates you so, so much, and you can actually hear it thinking mean things about your weight.

OUROBOROS HYDRA
Haha but no seriously I don't think this is gameable I'm just out of ideas.
Posted by Dunkey Halton at 02:50 No comments: