It's pretty easy to make an argument for classes in tabletop games. Classes are a way to let people quickly infer a large amount of detail about a character, so long as they've played in/read about the setting before. They're also a good way to balance the game between players, ensuring everyone has a distinct role to play and no-one can dominate every single part of the game. Not only are they healthy for the game, they're also pretty fun. Someone can pick up an outline of a person labelled 'Fighter' and then spend x sessions turning that into an actual character. So yeah; classes, levels, all that baseline RPG shit is there for a reason. 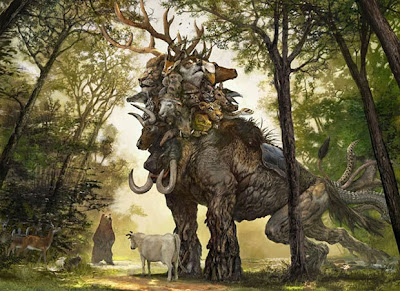 That all said, I think I'm going to ditch classes. I'm slowly setting up a little viking themed hexcrawl, in which my players are shipwrecked on a compact, flavourful island. To start them all off I'd like to drop the standard system, which always ends up with everyone I know wanting to be a druid, and instead start everyone with 4 Adventure Points™.

Adventure Points are cashed in at character creation in order to get your character an adventurey... thing, just like filling in inventory slots. You want to be competent with sword and shield? That's one AP, thanks. After skills as an alchemist? One AP. Pet cougar? An AP again. Rock-climbing gear and mastery of knots? One AP! General rogue skills are one AP, while specific expertise in trap-making might also be one AP. This works for spells, too. You want to be able to cast Magic Missile once per day? That's one AP. You want to be able to cast Fireball on demand? That's... probably 10.

And the AP system lets people build a class anyway. If you're really really into playing fighters you can start off strong with all your favourite ideas for what a good fighter can do. Sword and shield (1). Ability to do that thing dragon slayers do where they crouch behind their shield and are somehow unaffected by AoE (2). Ability to baseball-bat spells back at people with your sword, Zelda style (3). Suit of nice armour (4). Fighter done, and they're probably more fun than the stock standard duelist that knows Power Attack.

Or people can just make a character out of disparate elements that are tied together by who their character is, which is a nice variation on the character boxing that a class system can enforce. Nobody has to pitch a new class to the DM, they just grab abilities they think are thematically appropriate and then have the DM cost them in AP.


The next obvious step is to get rid of levels. While clearly, yes, you can level up and get +1 Adventure Points, I'm a lot more attracted to the idea that people pick up and wield power by just finding it on the floor of a dungeon, or going away and training for a few months.  Though it could be a little kitsch to throw a magic boon for every player at the end of every major dungeon, isn't that kind of what levels are anyway? Wait, isn't that kind of what major dungeons are for anyway?

So no more leveling up, and no more levels. You can measure power levels in approximate AP if you really need to. This also means you don't have to worry about players exchanging magic swords or even spells, so long as it makes sense.

All this might totally fall to shit if my/your players start power- or meta-gaming too hard, but running a session is kind of a dialogue, and you can always just tell a player that something's too powerful. Anyway. Hopefully my next post has less rhetorical questions, but for now here is a little party of "level 1" vikings. 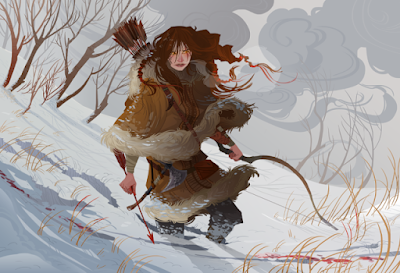 [Psuedo-Cleric I guess, based on the supporty kit, but why should a cleric not be allowed a weird pet?]

[Proto-Wizard and yet so much more colourful! If you want more spells you have to not have arms and armour, but you can totally just take the standard bow and make it something more exciting]

[Wow what a dank, uh, Paladin thing? You could even have a character that's just one giant 4 point spell and a lot of running away from things until you decide to just vanish the appropriate challenge. Kind of like standard DnD wizards.]
Posted by Dunkey Halton at 23:43