Magic the Gathering: the DnDening

Everybody in the goddamn world wants some way to convert MTG into DnD, but nobody ever seems to write a godawful hack. Maybe it's the copyright protections? Well I steal half the art on this blog from cards, so Wizards can come sue me into the ground. But yeah.

Go grab a giant handful of shuffled cards. You can experiment a little to see if you like the flavour more when it's all cards of the same set, or cards that you love a lot, or just any old shit so you're always a little surprised. For this test-run I will be using the first handful I could find, which appear to mostly be Ravnica Returns.


SETTING
Hunt through the pile for the first three lands you find. The first two you grab are the setting, and the last is the dungeon.
*shuffle shuffle dig grab* Hey look I just got an island, a forest and a Jungle Hollow.

The timing of that Hollow was totally perfect, but obviously I woulda just made it the dungeon regardless. Anyway, this means that my setting is on an island covered thickly in groves of palms, banana and beech trees, with a broken jut of hill rising up towards a thicker, wetter section of jungle. There's a town on the beachfront, at the bottom of the cliff the jungle sits on, and this town is called Jungle Hollow.


PLOT HOOK
Draw through until you hit a creature/artifact. This is the interesting thing about the setting. Creatures might be requiring murder, or are domesticated and getting sick. Artifacts are probably sweet treasure. Either way, the solution to this problem is in the dungeonland drawn above.
NOTE: You could also draw through to get a sorcery, and then interpret that as a plot/scheme, which you must foil/follow through on. No promises as to how well this works though.

First card I cut to is a Frilled Occulus. It's tempting to make this into a wizards familiar, stolen or butchered by mysterious parties. Instead I decide, kinda boringly, that I'm interpreting its activated ability as a proclivity for swarming the town of Jungle Hollow. Something atop that cliff is causing hordes of these blubbery octopus things to assault the town. Nobody seems to know why, of course. Let's find out.

ENCOUNTERS
Next you pull out 8 creatures. These will be encounters/people of interest. If you want to only take creatures that are in the colours of your lands that kinda makes sense. *themes*
I didn't though. 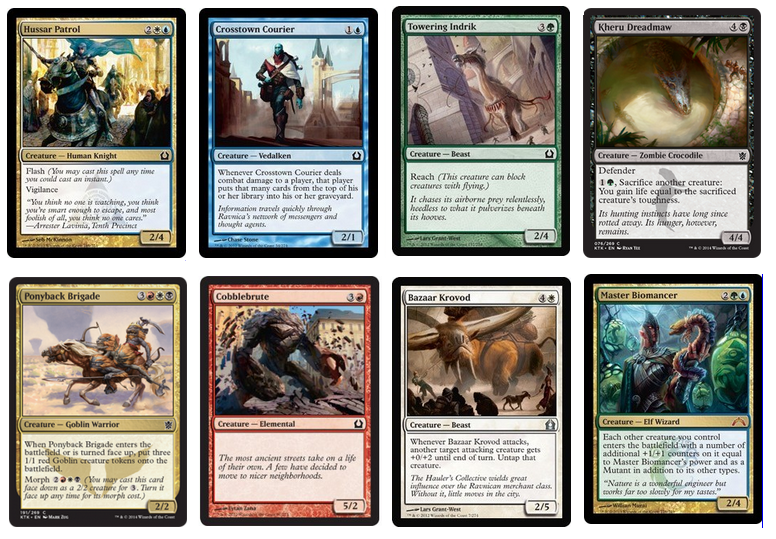 So I'm going to break these up and throw them into 'zones', represented by my lands. You've got the actual town of Jungle Hollow, down on the waterfront. This is the island, and contains the Courier and the Cobblebrute. The forest is the stands of trees between the town and the real jungle. This space contains the Brigade, Patrol, Idrik and Krovod. The last space, the actual Jungle, hides the Kheru Dreadmaw and the Master Biomancer. Oculus fights might take place in any of these zones.

The encounters have also given the space a lot more flavour. Giant monsters, a bunch of people riding mounts that are ill-suited to the terrain, and a wizard. It's pretty clear that Jungle Hollow is the one pit-stop between a handful of politically complex continents. It's so strategically important that no nation can actually take control of it; the others would just all declare war on them. Instead the town ships mercenaries back and forth across the huge inland sea it sits in the middle of.
The Biomancer, clearly the boss of this campaign, has unlocked the secrets of the Oculus (their activated ability) and currently has a few giant versions swimming around sinking ships. Don't have a clue why, just yet, and no-one can get past the huge monsters guarding the jungle, though a few groups are trying, simply because they're sick and fucking tired of being stuck on this island.


PLOTS/SCHEMES/SURPRISES
Next you pull out 5 instants/sorceries/enchantents. This system was more to make sure you're using all the different card types, but I'll let you know how it works once I actually play-test this dumb hack. Anyway, the idea is that sorceries are ongoing plots in the setting, enchantments are weird deals or laws, and instants are wacky surprise shit that you can throw into the encounters. Also, alternatively you can just make an enchantment, because that is still pretty sweet.
Not all cards will really work for this and it's cool if you want to not use half the shit you draw. No pressure babe.

My five cards are: 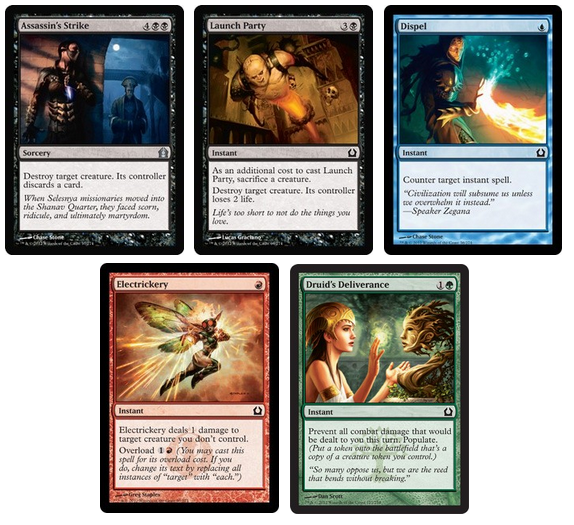 So the sorcery, Assassin's Strike, is the main plot here. The Biomancer is fucking with giant squid just as a distraction. There's someone in Jungle Hollow he wants dead, probably another wizard, since the objective is to kill them and make someone lose cards i.e. knowledge.
The instants are what I'm going to spring on the PC's, so it seems sensible that:

TREASURE
Draw three artifacts. These are the little treasures. Throw one in each zone, or double them up. I ain't telling you how to run your game.

The three I got are:

The Selesnya Keyrune goes with the Hussar Patrol. It's in their wedge and it keeps them more interesting than 'humans on horses'. The keyrune turns into a loyal wolf when you say 'Selesnya' at it. Or near it. Slowly turns back to stone over the course of a few hours, or when the same person says 'Selesnya'.
The Razortip Whip, a magical item that when cracked can strike anything the user can see, is safe in the hands of the Crosstown Courier.
The Burnished Hart is the interesting one. It's a robot deer used to generate mana? Sounds like it's probably a crusted relic owned by the Biomancer, used to store weird gene samples and growth potions, etc. Destroying this is a good way to take out the villains power source, capturing it is a good way to get rich.


PLAYERS
This wouldn't be any fun if your players didn't have to be magic cards too. My first thought was to have players pick legendary creatures, with the villain of the story played by the first planeswalker I found. But then the Biomancer was kind of perfect in this little story, and I realised how rare legendaries became after Kamigawa got shitty reviews. With that in mind, I figure it's okay for you to just find cards that feel legendary. Probably all rares, and remember to interpret them very broadly. Your PC can still be Ryusei, The Falling Star, even without being a literal dragon.
I did still found a legendary though, so that's the one example PC I'm supplying you with.

Tymaret is the second cousin of a demigod. His powers are pretty shit, and he long ago lost his family heirloom, the golden mask of the Murder King. He didn't even lose it in a poker match or something, just put it down in his house somewhere and hasn't been able to find it since.
Tymaret has two cool powers. First, given a blood sacrifice he can curse an enemy. This can make them roll for everything with a penalty for a while, or if Tymaret knows the details of one of their schemes he can ensure that it goes wrong in some irritating but probably manageable way.
His second power is more mechanically useful. If he dies in combat, you can take the heart of whatever killed him and put it in his mouth, restoring him to full health over a few minutes. If you can't find the thing that killed him, or if he just fell down some stairs or something, feed him any old heart and he'll heal up to reflect how impressive that beast was.


HOW YOU ACTUALLY INTERPRET EVERYTHING
This is the actual crux of the system. Every ability on the card should be represented in play, if it makes any sense. The first thing, of course, is mana cost. High mana costs on creatures represent high encounter levels. On artifacts they are an approximation of gold value. On sorceries and instants the represent the depth, complexity and politic ramifications of the plot. A good 8 mana sorcery is probably going to topple kingdoms. Converted mana cost 6 should at least make a duke very embarrassed.

On creatures, power and toughness are a guide. Take the Cobblebrute from above; it's a heft four-drop, and it's made of stone, but it's 5/2. Sure the thing it taking down buildings, but every time you hit it huge chunks cascade off like falling roof tiles. The 2/1 Courier might seem soft, but he will totally get a poison dagger in you before he goes down.
Creature abilities should similarly reflect how they work as a monster. The flash and vigilance on the Hussars indicate that they will turn up out of nowhere, and are impossible to take by surprise. The morphing token goblins will ambush you and there will be a shitload of them.

The other side of effects will have slightly weirder interpretations. I'm taking drawing/losing cards to be drawing/losing information. Dealing player damage is fucking with people's plots and schemes. Buffing/damaging/destroying creatures is pretty much just what it says on the box. Make sure to apply these rules across everything, especially character gen, where they will add all the weird functionality your weird PC has.


RUNNING THIS THING - THE BIT YOU DON'T REALLY HAVE TO READ

When I finish writing my simple 3.5 rule hack I'll get around to making another one of these and playtesting. I'll write that up on here and give a proper analysis of how this actually works as a session generator. Feel free to sit here hitting F5 until that happens.