Constructed over several hundred square miles of swamp, Kalixan has been slowly sinking for centuries. Everything within the necropolis is, broadly, either an insect, reptile, amphibian or zombie, and the entire place is completely full of the drier species of fishmans. Not much else survives all the other stuff. Adventurers flock to the city in droves and leave in handfuls. The allure of grave-robbing is generally greater than most people's skill in actually robbing graves. 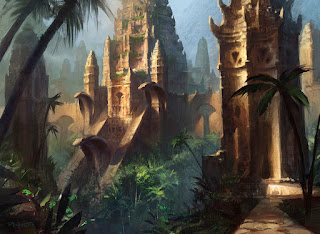 Bloated and blotchy red, an old grandmother will stalk you far more patiently than any normal crocodile. Her crimson spine will trail you through the swamp. You will find fat, splayed footprints and tiny rotted scales on the mudflats you cross. The sound of the beast will rumble across the water when you stumble.

Old grandmothers own their swamps more than a mindless animal ever could. Younger grandmothers will have bright scales. The oldest will be splitting slowly down the middle or sides, a fresh layer of scales peeking through the thick fat. When you kill an old grandmother it will shudder like the chill of fear, open wide its mouth and spew forth another, younger grandmother. This one, with bright scales, lacking the decay of its outer shell, will spew out a deeper crimson grandmother, a little smaller than the one before. As each crocodile sheds its mother's skin it loses a HD and gains an AC, shrinking and darkening to a congealed black. The smallest crocodile is no more than four feet long, with scales like stone, and a swollen stomach where its baby grows. Old grandmothers are always pregnant.

It's hard to tell whether this hulking, blue-green, lumpy, vaguely humanoid shape is controlled by the brain of the troll or the collective hive-intelligence of the bacteria which infest every square millimetre of its skin. They've lived in symbiosis for decades. The bacteria provides photosynthesis and the troll provides mobility, although what bacteria want mobility for is an open question.

Air around the cyanotroll very quickly becomes hyperoxygenated. This means even the slightest spark will start a fire, a fireball spell will ignite everything within a hundred yards, including you. Even damp wood will burn under these conditions. Any torch you happen to be holding will flare and gutter as all its fuel is consumed in a matter of seconds. Or the wooden handle will catch as well and race down to your hands. Fire deals double damage to the troll, as is normal for trolls. It is also deadly poisonous, so don't eat it. Any water it stands in for any length of time will become the site of an algal bloom which has the same oxygenating and poisonous effects. 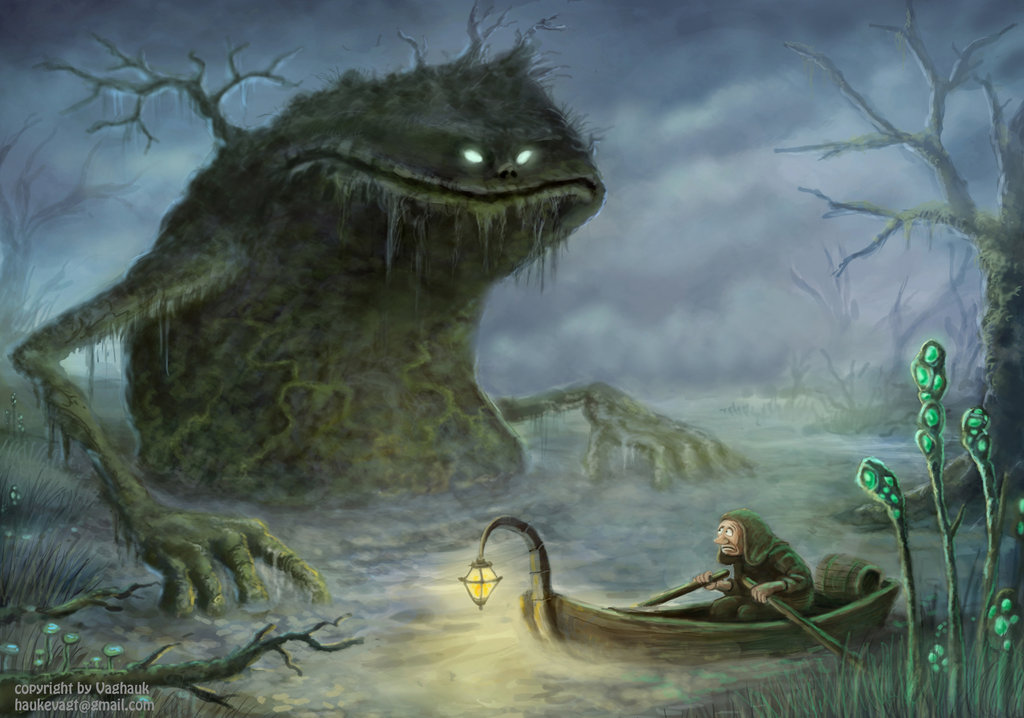 Very old man with half of face missing. Obviously a zombie, not trying to hide it. Will offer PCs ride through the swamp for reasonable price - two coins per person, any denomination - with minimum of fuss. Knows way around. Often to be found poling down boulevards of sunken city. Creepy but harmless. Has no terrible secret whatsoever.

Who builds a necropolis in the middle of a swamp, anyway? Was the swamp there first? If not, where did it come from? This is one of the many mysteries of the Miremoor. Anyway, the ferrymen have been tasked for centuries with dropping corpses off at the tomb-tanks. As they are already dead they have nothing to fear from most of the swamp's dangers, and can safely convey your beloved relative to the traditional resting-places of her or his ancestors.

They do, however, think that the PCs are dead. If they realize that the PCs are not dead - if they see them eating, drinking, making out or breathing heavily - they will freak the fuck out. You ought to be dead! They can't carry live people! Get off right now! No, I don't care that we're in the middle of the Lagoon of One Hundred Thousand Leeches. You can walk home, buster.

Super useful once you catch on, though. A smart adventuring party would figure out that the ferrymen have to be keeping their money somewhere, and are probably easier to steal from than the Lichmeisters of Sector V.

Temple guardians, mossy and crumbled but still quick and effective, minds surprisingly active. Want you to think that they can only move when you are not looking. Will stalk you across the mire and the steps of the drowning ziggurats, inching ever closer behind your back, so that every time you turn around they are in a different place, herding you closer and closer to a corner. You get your back against a wall, all the entrances in your line of sight, you think you've got them covered. Then they walk lazily up to you and disembowel you. Turns out they could have done that the whole entire time.

When not butchering intruders they laze on the sun and gossip about recent swamp goings-on. If you can get one on side somehow they're a great source of information. Offer it steak, fresh news. They're only so invested in temple guardianing; it's been thousands of years after all. Though theey can't lie they will absolutely kill you at the drop of a hat.

Ants can't breathe underwater, but that doesn't stop them. The lives of swamp ants are an endless march across a bridge made up of other, deader ants, in various stages of slowly drowning.These bridges can be miles long, snaking their way through pools of shallow water, forming humps and temporary shelters against rain and little balls of ants that get sent ahead to scout for new directions. Any food source - any dead thing, basically - is swarmed upon by the ants, skeletonized in seconds, and disseminated in little bits and pieces along the bridge so that everyone, even the ants who are the bridge, get a nibble. When an ant finally drowns it is cannibalized. The queen is somewhere in the back of the train, constantly laying more eggs. There are always eight or nine backup larval queens in reserve. When one of those queens reaches maturity she will take some ants, split off from the group and form a bridge of her own.

Swamp ant bridges can move very quickly across the surface of the water and can devour a herd of water buffalo if they're feeling up to the challenge. They fight epic battles for control of particular swamp regions. They won't touch the undead, and the undead return the favour.

Any decent scholar will be able to tell you that it's not shit, it's a mucous-like enzyme excreted from a gland near the cloaca. Everyone else won't care for the taxonomy, but will happily describe how it makes your skin melt. Shitbirds are, generally, quite friendly. They don't really understand what their secretions do to people, only that they drop a welcoming load on someone and then the person is gone and they have another fun puddle to play in. They are also not smart.

Shitbirds nest everywhere that you want to be. One entrance to the dungeon? Shitbird nest. One bridge that crosses the Black Ravine of Kazzrt? Shitbird nest. This power is almost magical in its ability to completely shit on your day. Aheheheh.

Shitbirds are about as big as a small cow. Their feathers and eggshells are immune to the caustic nature of their mucous. Cracking open an egg, scooping out the foetus and filling the shell with slime, for sale to the discerning wizard, is one of the best ways to make money in Kalixan without being horribly murdered. The birds will also not remember seeing you fuck up their nest only a week ago, and walking in again as they stare at you blankly will make you feel very guilty.

Everyone is reasonably certain that the naga built Kalixan. They do keep insisting so, after all. As is the usual case everyone is exceptionally wrong. The naga invaded Kalixan hundreds of years ago, slipping through the sewer pipes to surprise the true builders. The bloody war lasted a dozen years, ending only when the sheer quantity of naga blocking the pipes caused the city to sink into the swamp.

Naga are just what you expect. Long, serpentine body, topped with a near-human torso, and the traditional six arms. Less popular naga will have put too many arms on one side of the body, or missed a patch of scales somewhere along their stomach. The dashing rebels of naga society will do this deliberately; letting their bare spine poke through their back or replacing their eyes with gemstones. Politeness in naga society revolves around pretending that you aren't nearly as undead as you look.

Great naga sorcerers rule at the heart of Kalixan. This thaumocracy is almost exclusively female, as longer serpents are most magically powerful, and female snakes are bigger in most species that emphasis large litters.  The largest naga is guessed to be well over a hundred feet long, though naga always lie about the upper classes. Naga serpents will use the power of their unborn to fuel their spells and their lives, as the children slowly grow inside them and take over little parts of their brain. Some particularly insane naga queen probably invented Old Grandmothers as a joke.

Players can be naga if they want to be. The city's youths will often despair at the totalitarian rule of the central city, and run away to join the circus that is mammalian life. At under 10 feet long, these youngsters will be a little shorter than most people, with most of their body stretched along the ground. Naga characters can be anything except druids. Nature abhors a half-dead snake monster.