Loosely based on Patrick Stuart's SAVAGES. Except I wouldn't call a game where you play as Native Americans SAVAGES. Seems like a bad idea.

You can ride three hexes in a day. You are a warband. There are three or four of you. Your home base is your band, it moves around the map just like you do except in a semi-random way and slower. It spawns other warbands more or less constantly but most of these are not kept track of. There are other bands on the map, they are your allies unless they have some special reason not to be.

There's a few things moving around the map for the GM (Great Mystery) to keep secret track of. Every time a day passes she tallies it up. Bands move two hexes a day, wagon trains one. Trains five a day if the tracks are intact. Train engineers riding out on horseback, two. You could get pretty deep with this but as soon as you start wishing you had a computer to keep track of it you should stop.

The middle of the map is yours. There's little there but bison and the occasional cannibal owl. The edge of the map is also yours but periodically your enemies will seize control of hexes along it. Different factions along different edges - the Pueblo and Navajo to the west, the Mexicans and Apaches to the south, the Texans and Tonkawas to the east, the Pawnees and Osages to the north. Also the occasional French fur trader. Each one of these will in a semi-random manner establish settlements on your territory. If you leave these settlements alone they will grow into towns. If you leave them alone some more they will grow into cities. Different factions do different things - the Texans build forts, the Pueblo all live atop well-fortified mesas, the Mexicans try to convert you, the Tonkawas will fucking eat you, etc. (everyone seems to fucking hate the Tonkawas. Sorry Tonkawas! I don't mind that you used to eat people, I think that that is a rational use of resources). 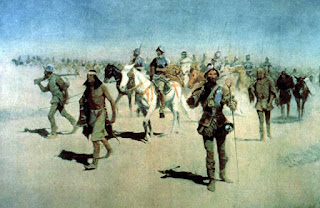 If you raid the settlements you can take their stuff. If you wait and let them grow into towns you can trade with the townspeople for even more stuff. In either case you can then take the stuff to the other side of the map and sell it for even even more, because you run a transcontinental trading empire that Eurocentric historians will do a splendid job of completely overlooking. If some of the stuff happens to be guns and horses you can use that stuff to raid more and larger settlements. You can just catch horses on the plains also because there's a shitload of wild ones. And you can hunt buffalo and make bows out of their sinews and shields out of their hides. Can't farm guns though. Sorry Comanches.

Anyway there's a obvious feedback loop here and it culminates in you becoming the wealthiest band in your band and getting ten thousand warriors together and driving your enemies back into the sea. Which almost happened a couple of times.There'd be a few different currencies to keep track of, like meat, horses, grain (need those carbohydrates), hides, slaves (to tan the hides), guns, powder, etc. Also respect, which is probably XP. You get it by raiding and by trading (though less so) and by completing missions and hunting buffalo and stealing people's horses and torturing your enemies to death, unless you want to skip that part because you are not thirteen years old. I would also import a "counting coup" system where you get respect for performing specific battlefield stunts like touching an enemy without killing them even though I don't think it was actually a Comanche thing at all.

You're not actually playing Comanches, you're playing fantasy fake Comanches who can use magic and don't have strict gender roles. You don't get to choose your own name, you are given a name based on how much respect you have. Really cool people will be Rides-The-Thunder and people who everyone hates will be Farts-Wetly. Political power is tied directly to how much respect you have. There are no political institutions so everyone just tags along w/ whoever they like the most, and you can always buy respect by giving away slaves and horses and other forms of wealth, so it tends to be tied to that as well. I suppose this doesn't allow for a chief to be called Farts-Wetly, which is a missed opportunity but w/e. You would probably also need a computer to keep track of this, but there's a reason I'm just summarizing a system in a blog post and not actually designing it. All combat is mounted. You would need a better system for mounted combat than any I currently know about. I'm thinking it's a sort of 4th-edition miniature-y chess-y sort of thing, except on a hexmap and you use that Diplomacy mechanic where everyone writes down their moves in secret and reveals them. You're always facing the opposite side of the hex to the one you entered it on and that side with the two sides adjacent to it count as Forward. It costs a movement point to go Forward and a movement point to turn around so you're facing another side. You get movement points equal to your speed, which is also the amount of hexes you can travel in a day, you and your enemies secretly spend them to do stuff. You can attack your enemies by riding into their square from behind. You can also fire arrows somehow, you can spend points to do other cool manoeuvres. Maybe you can spend a point to save a point so you don't have to use it until everybody else has revealed their moves. Stealth and sneak attacks are also important and everybody gets them. Or maybe something not even like that at all I don't know!!!. Standard disclaimer about needing a computer to keep track of it.

Not being mounted means you can move, like, once every two turns and just fucks you completely.

I don't know about classes. Pretty sure the Comanches only ever needed one type of warrior. If I were actually designing this I would figure out an actually viable combat system and work backward from there. Everyone needs to be combat-viable, the players are expected to do all diplomacy themselves. I like the mechanic where your spells have a secret list of failure conditions and if you fuck up too publicly you lose respect, I would probably have a wizard class based around that. Wizards are also warriors but maybe they have less movement and they lose out on bonus feats or something. Maybe movement points are also like mana points and it's just a single pool that everyone draws from and some classes get more movement but less abilities to use them on.

BUT THE POINT IS

You have these empires encroaching on your borders and you profit from their presence; they're the guys who gave you horses and made all this possible in the first place. Ultimately you do want to drive them into the sea and take over the continent, but they have a few advantages over you:

They can respawn basically forever. They represent the furthest outposts of a distant empire and that distant empire will just keep on sending them until it finds something more interesting to do. Unless they are normal people like you, then you can obliterate them and assimilate their culture and fight the people on the other side of them.

If you allow them to establish themselves they will grow at surprising rates. But allowing them to establish themselves is often the only way to make any real profit from them. You can "farm" one enemy for the resources you need to fight another, and this is the only way to make sure all those fights are actually won. You need the corn and potatoes from your Mexican vassal states to make up for the nutritional deficits of your all-buffalo diet so you can dominate the Apaches (basically what actually happened). As you get more powerful you will be making longer-term strategic decisions about this, deciding when to stop trading with somebody and start raiding them again so they don't get cocky.

They will send dudes after you. Osage and Navajo raiding parties moving around the map at the same speed as you, hunting your buffalo and stealing horses that you probably stole from them in the first place. Maybe with their own special magic powers although it depends if they seem okay with you using their spiritual beliefs, like I wouldn't use any of the Lakota sun dance stuff because from what I have read the Lakota prefer that you don't (if you start an argument about this in the comments I swear to God I will turn this car AROUND). Spanish punitive expeditions, slow but well-armoured but heat-vulnerable. Conquistador-led, bell-ringing clerics calling down minor miracles and dispensing the favour of the saints (I don't have any compunctions about using Catholicism because the Spanish have never had their culture murdered). Engineers armed with good old American know-how, land-surveyors who show up, dick about with a couple of little metal triangles and the next thing you know there's a work gang chopping a hole in the hills to run a train through. Forts that spawn buffalo-hunters who if left unchecked will economically extinguish you (also, in fact, what actually happened). Telegraph poles that allow your enemies to keep track of your movements with irritating precision. These would ideally also be kept track of on the map, moving towards your bands and the communities of your vassals, trying to do to you exactly what you've been doing to them. Except the telegraph poles I guess. Those just... stay still?? No I've changed my mind they are all Telegraph Golems every last one of them.

Your equivalent of a lich is a Texas Ranger. This guy moves as fast as you do, can track as well as you can (with the assistance of her Tonkawa allies), can ride as well as you, has all the advantages you rely upon to make one of you worth five of them. Her horse is better than yours, her gun is shit right now but as soon as Mr. Colt can borrow somebody's factory they're getting these new "revolving pistols" that don't even need reloading and will level the shit out of the playing field. She has learnt all her best moves by watching you do them. You probably killed her brother, her wife, her best friend, the guy who ran the second best saloon in Corpus Christi. I am going to say that each of you has your own personalized one of these, your own nemesis, who has sworn vengeance upon you and who advances in respect exactly as you do. Your legends are bound together. The more people you kill the more determined she becomes to kill you back, the more justified she feels and violent she gets, and the more funding she can snag a hold of. This is also true of your nation. The fuller your power waxes the more your enemies pay attention to you and the more determined they become to destroy you.

I'm also wondering if the game should keep track of the phases of the moon, because full moons are best for raiding and there ought to be a sort of cyclical aspect to it. But maybe that's too neckbeardy IDK. (Actually maybe the basic unit of time is moon phases, i.e. weeks, instead of days, I just thought of that. Might be less granular and allow you to get more stuff done in one.) 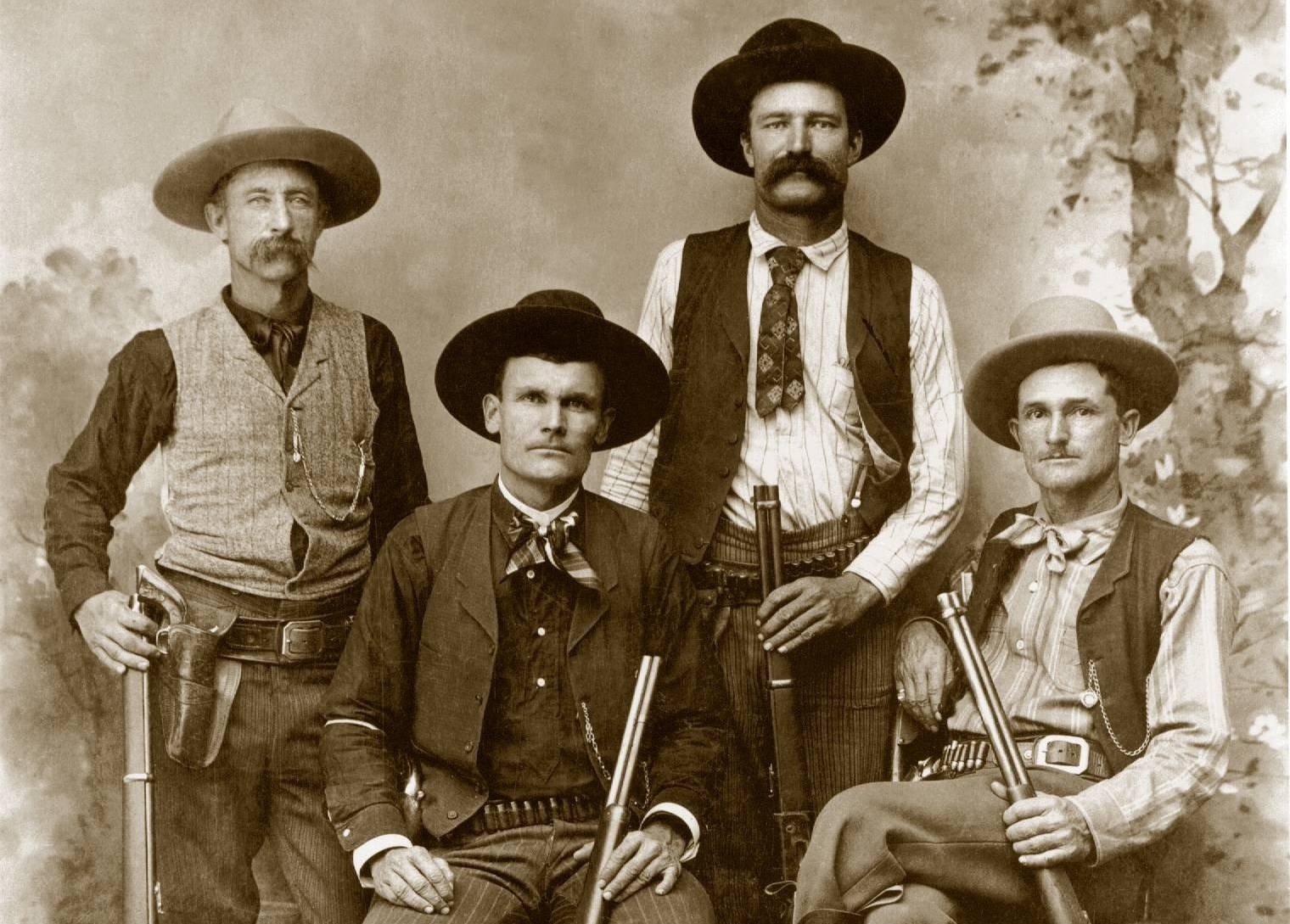 NOW GO PLAY THIS AND PRESUMABLY REPORT BACK TO ME.