The trick to making a silly idea work is to take it completely seriously and see what happens.

One of my players decided to be a cleric and I was like "what god do you worship" and they were like "Sugor, the sugar god". Pronounced soo-gore. He demands tributes of sugar from every corner of the world. I have decided he employs a caste of heavily moustachioed dwarven confectioner-architects to make temples out of it. They all have ancient hereditary totem-aprons and spirit whisks and things. It's a prestige class maybe.

Of course you'd worship sugar. You live in a medieval society, it's incredibly rare and your body is programmed to crave it. The demand for sugar drove colonial endeavours in every corner of the world. Imagine being offered a chunk of raw cane sugar and having never tasted it before. It would blow your fucking mind. You would have no idea what you were dealing with, you would be pretty sure the gods sent it just to fuck with you. 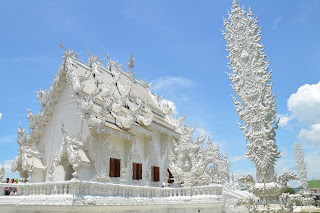 - except made from sugar, which the White Temple of Chiang Rai presumably is not. You are strictly forbidden from just snapping bits off and eating them as you walk around. That privilege is reserved for the high priests, who are all obese, toothless, slowly rotting from the inside and inclined to plunge into hallucinogenic comas. They run the city. It works out super well for all concerned.

Since the ruling caste are big fat guys, I have crab men running about and it's all vaguely south-east Asian I'm reading through Yoon-Suin to see what else I can squeeze in there. Hungry ghosts maybe. They're big on castes. I think they take samples of your blood at birth and assign you a job based on some pseudo-scientific nonsense about how much sugar you have in there and what kind it is. There's a law stating that any building not made of sugar can be no more than one story tall. Giant ants are a perennial nuisance. The dwarves have a city over the eastern mountains called Sherbetabad. The respected dead are preserved in glass coffins filled with syrup. Cultists of the Bitter Heresy are loathed as enemies of all that is good and right and sweet. Most people are just peasants and get on with their lives and don't think about it too much. They farm barley and coffee, not sugarcane. It's all grown and refined in the Goblin Marches, which makes sense because goblins are notoriously steampunk and refineries are steampunk as shit.

I'm going to send the players to an abandoned and collapsing temple under siege by ants with orders to get a priceless relic out before the rains come over and the whole thing disintegrates. Which usually doesn't happen because *thinks furiously* the ancestor spirits protect it, I guess? Or maybe it's a chemical secret of the dwarves. But I like the idea that the spirits have fled because the temple has been desecrated by acid-worshipping Bittermen in league with the ants.

There are two factions of dwarves - crystalline and amorphous. Amorphists believe in alloying the sugar with butter, fat, oil and citrus, for a smoother and more malleable product. Crystallists believe that it is abominable to adulterate the pure sucrose with any lesser substance. They intrigue against each other endlessly. The players are unwitting pawns in their game. My secret mission is to see if I can get them to actually take any of this seriously. 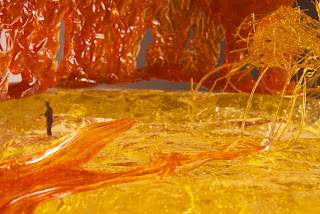