In the absence of heat, of light, of fuel, they hibernate. Like those Alaskan frogs that can tolerate being frozen. Like Encino Man. Like Siberian mammoths or mosquitos in amber, waiting to be cloned. They take no shape during hibernation - they are an instant of preserved potential, something permanently about to happen, a bowstring trapped in the moment before it is released. They are coded to a particular location but they are invisible and immaterial until they are supplied with energy and form.

An ancient brass lamp still filled with cold black oil, awaiting a flame. A dusty furnace heaped with coal by some forgotten hand. Biomass heaped in a rainforest gully, still gently smouldering, six months after the last fire. An anvil-shaped cloud bulking over a shadowed plain, dry wind promising thunder. An underground fountain of natural gas. The grinding tension of tectonic plates poised against each other with unimaginable pressure. The brush of solar wind against the upper atmosphere, inciting atoms into an ionic frenzy.

You light the lamp. You spark the furnace. You stir up the leaf-litter and let oxygen in.

They have no true forms, find the idea ridiculous and a little insulting. They have learnt to take human forms, to pass among you. To camouflage themselves. To appear friendly. But they do not interact with light the same way you do. They are luminous photonegatives, cold colours lit from inside.

The laws of physics mean something to them but not the same thing as they do to you. They are bound by fuel and magnetism but not shape or gravity. Their touch does to reality what a cigarette butt does to a strip of film. They can make anything you want out of their own substance as long as you don't expect it to last more than a day or so, more if you feed it, less if it gets cold. They can liberate your consciousness from your skull and take you on a tour of the globe, riding the geomagnetic currents above the earth, bargaining for passage with their nomadic brethren in the exosphere, towing the energy lattice of your soul behind them like a child's balloon. They have strict codes of hospitality and lie all the time. They can be bound by anyone who controls their fuel supply and will happily grant favours to anyone who can help them achieve their goals. Their skin burns you. The gold they pay you in crumbles to ash. 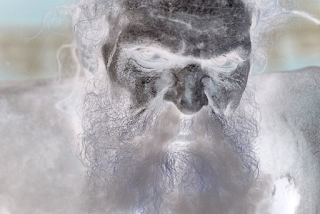 They are building their own universe out of pieces of ours.

There are two competing visions of the world. One high-energy, one low-energy. One where motion is the default and rest is the exception, one vice versa. One where the constant transmutation of matter is necessary for the perpetuation of life and where anything remaining the same for more than a second is frostbite and corrosive death. And one which is the opposite.

At the beginning of time we fought with them to see whose vision of the world would predominate. The angels took our side. We won. They resent us. They want to eat our cities.

Whenever a palace burns, a witch, a jungle, a painting, a prophet - anything interesting or beautiful or which just happens to strike their fancy - it is taken through to the universe of the Sibli. Their universe is small but growing. Chrome deserts. Citadels of ash. Ghost peacocks. Veiled dancers flickering between wavelengths in the nuclear shadows.

You can survive in the universe of the Sibli, just as they have been surviving in yours since the beginning of time. You will create a zone of stability around yourself. You will not understand most of what you see and destroy most of what you come into contact with. You will walk on the ceiling and freeze everything you touch. You can free their hostages, reclaim the burnt treasures of eradicated civilizations. You can speak with martyrs and the centuries-dead.

The Sibli are not evil. They are doing this out of desperation. Our universe is toxic to them. They have nowhere else to go.

They are fighting a guerrilla war against reality itself. If they are not stopped everything you love will burn. 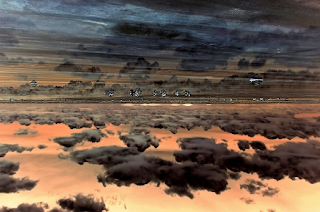 (loosely based on Arnold K.'s rant about fire elementals, which you can find here.)
Posted by Dunkey Halton at 05:45