The Golden Eyes of Shahr-e Sukhteh

A Golden Eye of Shahr-e Sukhteh is a ball of rubbery pitch, covered with a thin layer of gold and engraved with a circle (for the iris) and a pattern of lines that represent the rays of the sun. Tiny holes are drilled on both sides. To wear the eye you have to have more tiny holes drilled into the bones of your eye socket so that somebody can get a needle and golden thread and actually sew it in.


All of this is true. (Well, I'm not an archeologist, it's an obscure thing that somebody got very excited about on Wikipedia). What is not true, but might be cool maybe is the following: 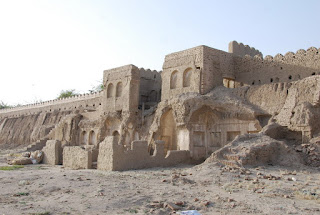