the rainbow path is an ontology. a creation myth and a guide to self-creation. both spiritual and intellectualized, embedded in culture. like the cardinal directions in syr darya, star signs or the heavenly branches, it provides a framework for understanding, interrogating and finding peace in the world

the rainbow path must be walked in order, from blackness through genesis to selfhood. service to others before reproduction of one's own. attaining harmony in the moment, before enshrining one's values for the reapplication of this cycle.

each step on the path can be thought of as a process, and attempting to skip a step in this chain will inevitably lead to a reverse in the flow of energy through these processes. this backsliding from order into the chaotic void is venerated by the lowest order of heretic as the black rainbow, path of the vampire sun

the rainbow path should be walked again and again in life, with no thought as to a destination. it is said, however, that there is a seventh colour, that of enlightenment, which can only be seen by those who have mastered the rainbow. many of the enlightened beings that have spoken of this experience describe UV light as held in the understanding of Ultra-Violence. scholars broadly suggest that these beings have fallen to the vampire sun

red is motion, life. genesis and the emergence of a waveform in the void. its element is fire, its virtue is decisiveness, its organ is the heart, its animal the snake. its scholarly arts conjure fire and grant quickness, can transmit objects across great distances. its martial arts rain a hundred flaming blows with the sword. it grants your warform extra arms and fearsome fangs

orange is consolidation, discretisation. self-conception and a waveform collapsing into a particle. its element is iron, its virtue is courage, its organ is the skin, its animal the goat. its scholarly arts refine and harden, can make a pebble as unmoveable as a mountain. its martial arts can turn aside blades and punch through steel plate. it renders your warform armoured and utterly inviolate

yellow is division, gift-giving. mitosis and a particle spewing energy. its element is gold, its virtue is generosity, its organ is the lung, its animal the bee. its scholarly arts partition and bisect, can loan life essence and healing. its martial arts turn hands and feet to vorpal axes. it arms your warform with blades that can cut truth in two

green is growth, self-sufficiency. crystallisation and the formation of molecules. its element is wood, its virtue is fecundity, its organ is the stomach, its animal the panda. its scholarly arts swell and make fertile, can burst forth a grove from a single seed. its martial arts swing hammers with ponderous, unstoppable strength. it grows your warform as large as a mountain

blue is harmony, equanimity. sustainability and stable orbits. its element is water, its virtue is peacefulness, its organ is the mind, its animal the koi. its scholarly arts calm and conduct, can settle a storm or call one up. its martial arts conserve motion, launch a perfectly timed arrow through the heat of a battle. it lets your warform hold back from war, de-escalate violence

violet is recursion, respect. fractalisation and ancestor worship. its element is air, its virtue is honour, its organ is the reproductive, its animal the dragon. its scholarly arts predict futures and conjure spirits, can slow time to a crawl or stop it outright. its martial arts practise the same blow ten thousand times, until it is the thought itself that strikes the foe. it imbues your warform with spiritual authority and a voice of binding command 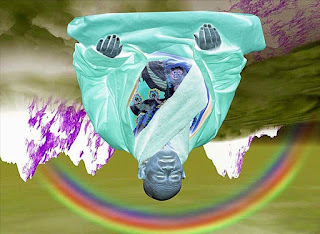 many rainbow traditions extend this praxis further. most common is the inclusion of a colour wheel, often called the Wheel of Suffering, or Wheel of Conditional Enlightenment, which holds enlightenment either in the center or on the rim, and often harmoniously opposes colours across its axle. indeed the colours are greatly partitioned. the lower/higher or id/ego divide, r-o-y against b-g-v. positive/negative or outward/inward delineations, r-y-b against o-g-v

in almost all of these traditions, the black rainbow remains a constant mirror of the light. each dark colour is a reflection of the true, but is also wholly defined within the rainbow path. pyrrhous is refracted red, true, but can also be seen as a reaching for orange energy - self-identity and self-preservation - without first mastering red decisiveness and courage. the result is paralysis, fear, impotence; pyrrhic catatonia.

so it continues. fulvous: self-sacrifice before self-definition, subservient erosion and debasement. xanthic: accumulation before charity, small-minded greed and hunger. feldgrau: gregariousness before self-containment, an infectious overstepping of bounds. glaucous: self-veneration before an understanding of the other, masturbatory idolation. phlox: grasping at enlightment without respect or virtue, the beginning and end of the Wheel of Suffering.

phlox is undoing, sacrilege. unholiness and the cutting of knots. its adherents claim it is antienlightenment; the delicate wingbeat of reality that butterflies down the rainbow into searing entropy. its scholarly arts dissolve and devolve, necrofy spacetime and convoke foul shades. its martial arts seek to unmake utterly, strike the whole timeline of a life. its demons tear holes in space like ripping through wet flesh. its herald is the beholder*

glaucous is turmoil, mutation. incest and catastrophic collapse. a bruised purple narcisism turned to eugenics and arms race. its scholarly arts destabilise and debilitate, provoke tumours and twist the genome to malevolent ends. its martial arts are a barely suppressed suppuration of self that inevitably consumes its practitioners. its demons crawl through marginalia and gut linings, budding up to instigate imbalance and violence. its herald is the troll

feldgrau is overgrowth, pestilence. population collapse and nuclear meltdown. contaminating other systems with the unmastered self. its scholarly arts bloat and overwhelm, exacerbate sin and crush enemies under their own weight. its martial arts overrun with ever-increasing force, suddenly twist and use your own weight to pull you under their bulk. it's demons bud forth new teeth and eyes and arms with every cut. its herald is the hydra

xanthic is theft, greed. addiction and exsanguination. obsession with stockpiling and stealing the last possessions of the poor. its scholarly arts drain and dry, sap strength and suck out the soul. its martial arts wage wars of attrition, demand diets of blood gold and that extend life to unnatural span. its demons curl chittering underneath coins, whisper in the ears of merchants and treasure hunters. its herald is the mummy

fulvous is facelessness, suicide. grovelling subservience and erasure of identity. debasing and subsuming the self to unholy aims. its scholarly arts dominate and demean, scrub memory and scour into utilitarianism. its demons enslave and torture, carve out homes in hollow human shells. its herald is the doppelganger

pyrrhous is paralysis, fear. stillness and gasping, desperate, futile self-preservation. absolute refusal to take action, a slow collapse into entropy. its scholarly arts freeze and entomb, slow the crawl of time and hold implacable inertia. its martial arts are rarely used to fight, but rather to sit in lonely desolation, unmoved by the collapsing of the world, dragging all else down in lament. its demons moan and weep piteously, insist that they were once like you and you will soon be like them. its herald is the basilisk

*beholders are guys with black holes for heads
Posted by Dunkey Halton at 03:34