The People Who Try To Fight You All The Time

You depart from camp with two missions. One from PEACE CHIEF, one from WAR CHIEF. Sample missions: 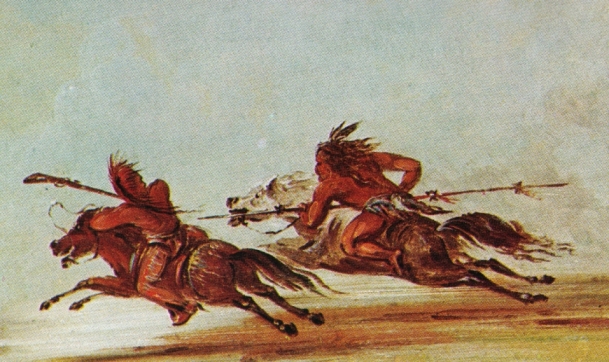 You are surrounded by enemies. Your enemies want your land. They send their power and might and wealth and citizens into your land. They think that this will give you their land. But you take those things and then they are your things. Your enemies are idiots. They do not understand you exist. They think they are the only people. You may not be geniuses but you understand that you are not the only people.

All combat takes place on horseback. Not being on horseback is like being crippled or blind. Most of your enemies are not on horseback. Your enemies have a kind of soldier called a "dragoon" who rides to the battlefield then gets off their horse and fights on foot. When you first saw this you thought it was a trick and you were a little scared of it in case they were secretly incredibly powerful, but you soon realized that they were just very stupid. Then you stole their horses and rode away and left them stranded on the plains to starve to death. The enemies whom you are most scared of are the enemies who have best learnt to imitate you.

You are better at horses than anyone else in the world has ever been, ever. It is your only technology. Your environment is so simple that it is the only one you need. You have one terrain type and one food source. Your enemies have many technologies but none of them are relevant. For some reason they think this makes them better than you. They think that you are subjects of their empire. Their great-great-grandchildren will think this also. This is very funny to you.

You measure your wealth in horses, slaves, cattle, weapons. You own a lance, a bow, a shield. The lance is tipped with feathers, the bow is backed with sinew, the shield is two layers of fire-hardened hide with paper packed between them. You hold arrows in one hand and the bow in the other. You hang from the side of your horse and if it is killed you land on your feet. You ride in circles as you attack. Your bows are better than guns, you take your enemies as they reload. Your arrowheads are iron and bend as they hit bone. You respect the fashions of your enemies - you take their braided jackets, their medallions, their feathered bonnets. You stake them out and pile cinders on their bellies. You skin the soles of their feet and chase them home. You earn respect in this way.

A force has been marshalled against you. They keep track of your misdeeds and plot you a vengeance for each. They learn your skills, one by one. They fight from horseback. Their guns need no reloading. They know where you are. They have cannibal servants to track you. They are paladins of the atlas and they gain power for each square mile they conquer. You must keep them disrespected and ill-funded, you must anticipate their traps, you must undermine their economics. You are the demons of their faith and as your deeds become more fearsome your hunters become more practised, more determined. You cannot use their own techniques against them because they are already doing that to you. You can only attack their respect, you can only kill them by killing their myth. They are empowered to make new laws. They believe any strike against you will be justified. There are always more of them. 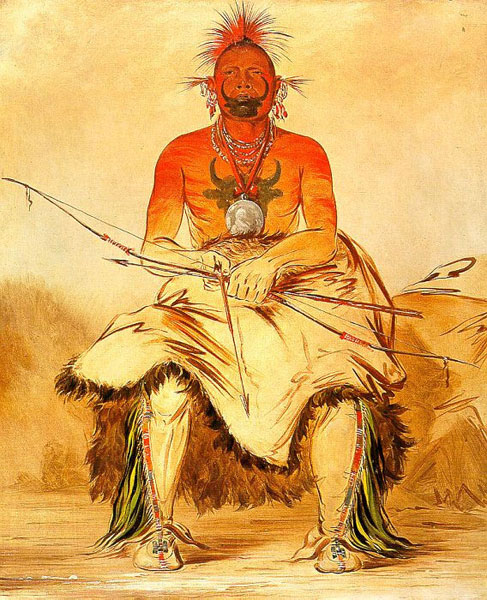 (So I've been reading books about the Comanches. Empire of the Summer Moon was racist and had too many sentence fragments, The Comanche Empire is less well known but much better. Not all of this stuff is Comanche and I don't vouch for the historical accuracy of any of it. The guy in the third picture is Pawnee and the Pawnees didn't even like the Comanches. Look at him though. What a legend.

The stuff about the prophets is all based on a guy called Isatai. The deal with Isatai is that he told people he could make them immune to bullets, they went and attacked some dudes with guns and got shot, the survivors rode back and were like, your name is not White Eagle any more, it is Isatai now, also Isatai means "coyote's vagina". And everyone called him that for the rest of his life. So if your players fuck up you should give them stupid new names and make them actually write the stupid new names on their character sheet and carry them around forever. The paladins of the atlas are the Texas Rangers, who it seems were invented to kill Comanches mostly.

Also the hypothesis of The Comanche Empire is that the Spanish attempt to subjugate North America was foiled when the Comanche got hold of horses and figured out how to use them and set about subjugating the Spanish right back. Like New Mexico and Texas were basically Comanche vassal states. Which is cool and good to know I think. And D&D with an American colonial theme is called Dugouts & Dragoons and it's too late and the decision's been made and there's no longer anything you can do about it.)
Posted by Dunkey Halton at 20:47