Wizards (in 3.5) are at their most powerful immediately after they wake up. Technically they have to spend an hour each morning studying their spellbook, but I have never played a game where this has been important and neither have you. (Who wants to do an hour of compulsory rereading each morning, anyway? Wizards, I guess.) There are of course much more interesting ways you can annoy your wizards but this one is good because days often map pretty well to sessions. However, unless your wizard is super conservative with their spells she always runs out and ends up having nothing to do for the rest of the session. So it's not good, and actually bad.

(Maybe if your game is high level enough this stops being a problem but I'm pretty sure I've never gotten to the point where wizards start being OP in anything, ever, even Neverwinter Nights. The whole high-level you-all-own-castles-and-fight-Demogorgon thing is just a meaningless abstraction to me. Like finding Mew under the truck when you were eleven. Cool to think about but what, in practice, would even be the point? The parallels between epic levels and legendary Pokemon are pretty close actually.)

I've been reading through Patrick Stuart's blog from the beginning (to fill in time between grading student papers, of which I have many) and he provides a pretty neat rule to solve this problem. Basically if you want to cast a spell that you don't have prepared you can still do it, you just have to roll on the Terrible Magical Calamity table. This is obviously a Good Rule. (I think he got it from someone else who got it from someone else, etc etc., whatever.) I am going to change it a little though.

Here's your spell list or whatever. People like choosing spells! There are more in the Pathfinder SRD but honestly you don't want to give them too many. How it works is: for each sleep cycle you get you can prepare one spell. Sleep cycles are about ninety minutes. This means if you sleep for nine hours you can prepare six spells. You can cast each spell you've prepared a number of times equal to half your level (rounded up) minus its level. This obviously means that you can't prepare Level 3 Spells until you're level seven, or you can but there'd be no point.

Maybe not exactly like that but you get the picture. You get -1 to your roll for every unprepared spell you have tried to cast since the last time you got at least one sleep cycle. You get -1 to your roll for each level the spell is above half your level (rounded up). So feel free to cast meteor swarm at level three, that sounds really funny. Maaaaaaaaybe you could add your INT bonus to this roll if you were, you know, a lame nerd.

One of these also happens if a wizard is woken up while she is halfway through a sleep cycle. Don't wake up wizards. Again, you could give them a save, if you were lame. You will note that this system provides a powerful incentive for wizards to use potent sleeping drugs to remain in a state of Ultimate Slumber for five, ten days at a time. This is very much by design. Also some wizards will say "fuck it" and purposefully stay awake as long as possible. They are called "insomnomancers" and they are terrifying, probably. They gain more weird, perverse powers with every day they manage to stay awake, although I can't think of what those might be right now. They accumulate a few minor magic calamities that they learn to live with. They also acquire some of the following symptoms of sleep deprivation, copied directly from Wikipedia:
Which is the best description of an evil chaos wizard I have ever read. A big fat bastard with malignant warts on his eyelids who throws tantrums like a baby. The warts probably talk in tinny little baby voices. Roll a bunch of d20s or just use all of them. 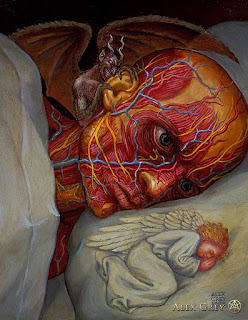 Email ThisBlogThis!Share to TwitterShare to FacebookShare to Pinterest
Labels: Classy