Watching you from above. An androgynous youth in a colourful parody of military uniform - shako and tasseled boots, flimsy epaulettes, cords that trail upwards until they disappear into the darkness of the night sky. Could almost be a puppet of something unseen, but it moves under its own power - dancing on air as if there were invisible stones wherever it chooses to place its feet. Mockingly graceful. Peers at you through a rolled-up bit of paper that it pretends is a telescope. When it catches you looking back it laughs and pokes its tongue out. It is not afraid of you.

The Snitch targets people who commit unsavory acts under cover of darkness. Thieves, assassins, prostitutes, drunkards, adventurers, revolutionaries - the Snitch doesn't care, as long as it can feel morally superior to you. When it fixates on you it will follow you around, night after night, relentlessly perving on you from a safe distance until it catches you doing something naughty. This could be as big as murder or as small as pissing on a tree. Either way, the Snitch will report your bad behaviour to the Sun, who it considers to be Father. The whole next day the Sun's rays will seek you out. They will burn you and any house you're in and any shelter you're find until you're either dead or very, very sorry for causing trouble. The next night the Snitch will check in again, just to make sure you haven't backslid.

The Snitch is very good at dodging arrows. One way to fight it is lure it close to a window - it's reluctant to enter houses, or any other confined space, but it's an intensely curious creature and you can use this to your advantage. Once it gets its eye on you it's hard to shake off, but if you're a good boy for long enough - six months or more - it will get bored and go away. 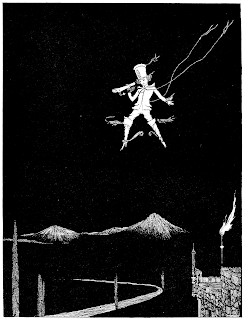 I'm not really a stats guy but:

submitted under https://creativecommons.org/licenses/by/4.0/. Details of the project at Cavegirl's blog.
Posted by Dunkey Halton at 19:09